Fuji just released a new 3D digital camera. I think this is the first such consumer grade digital system. We’ll see how this camera works out, but others will follow, and this is great news for geoscience education.

Until now (or if you used one of the many old film-based stereo systems), you needed two cameras and a synchronization system. You can use a sliding camera, but anything that moves (e.g. water and sediment in a river model) won’t be correctly rendered. So an all-in-one system like Fuji’s is welcome.

We’ve been working on stereo photography, both for the Geowall system and for Close Range Photogrammetry (CRP). This photo (click on it for a high resolution version) is a quick sliding camera shot I took to display on Saint Louis University’s Geowall system. We hope to develop a simple system for students to capture morphology in their Emriver Em4 for later display on the Geowall.

This month I talked with Neffra Mathews, a researcher who works for the BLM in Denver, about CRP. She’s done some amazing work with it and was kind enough to give me a one hour phone tutorial. More on CRP later, but we’re hoping that with a simple digital camera-based stereo system we can capture images of our river models that are useful both for stereo viewing and for measurements of topography that are at least good enough for student training.

The possibilities for our river models are endless. Time sequence capture of changing fluvial morphology without the hassle of multiple cameras and complicated software makes this technology accessible for student use. Very exciting stuff.

Thanks to the NY Times, article here.

UPDATE: The Fuji is not a camera I’d run out and buy based on early reviews. 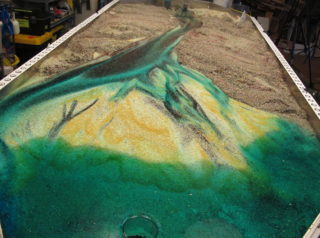 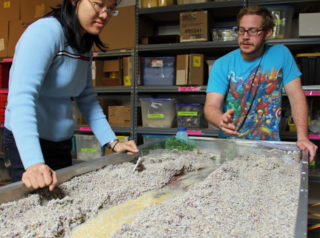 Goodbye and good luck to Lily Hwang
back to blog index