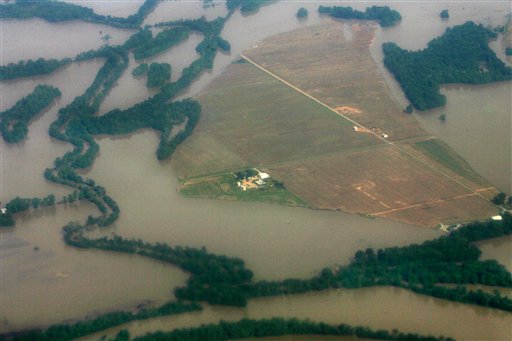 I believe that climate change may be the most important issue facing river managers, especially those concerned with the effects of flooding on people. Dodging tornadoes to deliver our Em4 to Winona, MN and later doing fieldwork in Michigan, Jesse, Cara, and I drove through much of the corn belt over the last two weeks. An NPR interviewee this morning said nobody’s seen a year for corn like this one, ever, with some planting still undone and millions of acres planted very late. We saw this firsthand in our long drives.

This spring’s flooding is a dark harbinger of what many of us expect on the big midwestern rivers: The 500-year levees aren’t that, they’re maybe 30-year levees, and with climate change, all bets are off. And people have around $3 billion on the table in the Chesterfield Valley west of St. Louis. Nice NY Times article, quoting our local friend Nicholas Pinter, here.

A few links (and see the linkbar at right) on climate change, flooding, and midwestern ag:

Reuters on the flooding, agriculture, and corn prices.

And climate change can mean too little water: From T.H. Brikowski in a recent J. of Hydrology paper.

“Streamflow declines on the Great Plains of the US are causing many Federal reservoirs to become profoundly inefficient, and will eventually drive them into unsustainability as negative annual reservoir water budgets become more common. The streamflow declines are historically related to groundwater mining, but since the mid-1980s correlate increasingly with climate. This study highlights that progression toward unsustainability, and shows that future climate change will continue streamflow declines at historical rates, with severe consequences for surface water supply.”


A New Home for the First Emriver Em4

An Em3 and Em4 at Gustavus Adolphus College

Our First Em4 in California!
back to blog index