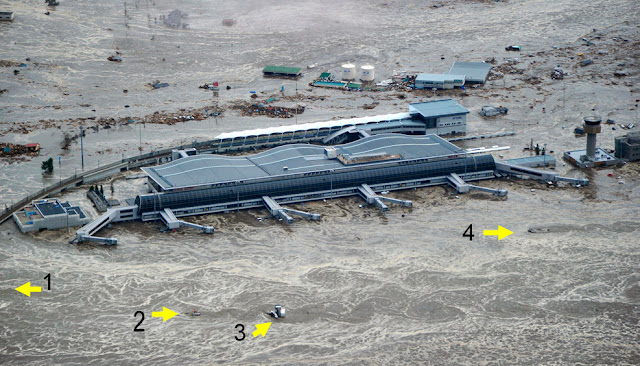 Callan Bentley asked me about the large vortices in this photo from the Globe’s Big Picture series; I thought the answer was worth a post here.

UPDATE:  I’ll continue to add information of scientific interest regarding tsunami flooding and other phenomenon around the Sendai airport; two days after the event we have reports of horrific suffering and loss of life.  I hope this discussion improves understanding of flood hydraulics and want to express my compassion and concern for the people of Japan.

The aerial shows tsunami flows through Sendai airport in northern Japan today.  What you see are von Karman vortices.  There are several “von Karman street” structures.  The big ones at the bottom of the photo are being shed by something we can’t see, off to the left (arrow one).  At arrow two you see a small series that is interrupted by another structure at arrow three; which makes more that blend with those from the arrow one object.  And more from another object at arrow four (click on the image for a larger view).

We see these vortices because the tsunami flows are moving in a homogenous sheet over the very flat and level surfaces of airport runways and taxiways.  Fascinating regularity amidst the chaos of this tragedy. 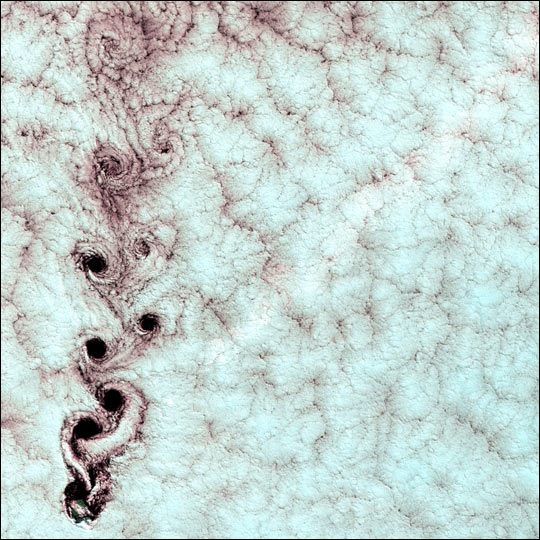 The radio antenna of a truck I owned had a small wire wrapped in a spiral around it to disrupt the vertical sameness on which von Karman vortice formation depends–the vortex shedding makes car antennas, and sometimes overhead wires, sing if they resonate with the frequency of vortex shedding.

UPDATE.  Here’s a morning after photo of the airport, and another photo of men building a raft on one of the buildings after the flooding; and there you seen planes and other debris moved by the tsunami.  All from today’s New York Times photo series.  The floodwaters aren’t draining well, either from clogged stormwater structures or quake related subsidence, I’m betting on the latter.  I’ve seen a lot of flood damage, but the devastation in the Times series photos is unbelievable. 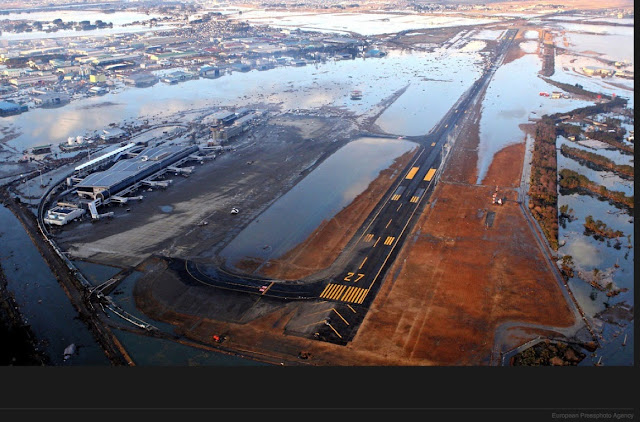 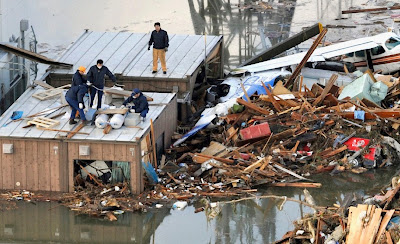 UPDATE: New video of leading edge of flood wave from inside the airport terminal.  This thing is like a violent flash flood, except those are usually confined to small areas and narrow valleys; this is miles wide.  Hard to imagine.

UPDATE: Akiyoshi Kenji (aki3) has published a Gigapan image of the area around the airport.  And Callan Bentley has published an excellent summary of tectonics and displacement showing that that there has indeed been a lowering of surface elevation in many areas, so the flooding may be there to stay.

Another aerial Gigapan from the Geographical Survey Institute of Japan, taken on March 16, 2011.